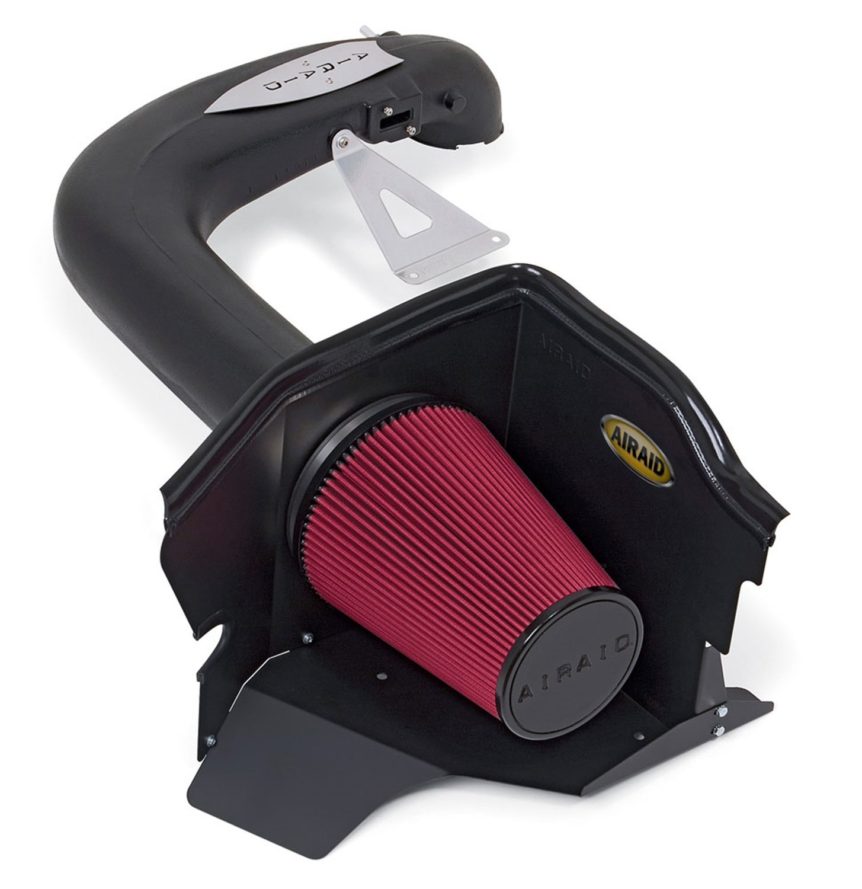 If you’re reading this, then your probably looking to add some horsepower and grunt to your Ford F150. Well, you’ve come to the right place! 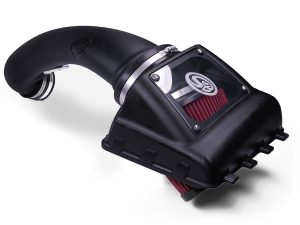 As you probably already know, stock cool air intakes restrict the amount of cold airflow to your engine. This results in less horses being made and a muffled intake noise – the opposite of what we want to achieve! A shiny new air intake for your Ford will do more than just look good under the hood – it will increase power, throttle response and sound sick!

So how does a cold air intake system work ?

Without getting too bogged down in the nitty-gritty details, imagine your F150 engine as a pair of lungs. In order to make power, the engine has to inhale air to create the explosion that produces the horsepower and torque. For all the none scientists, cold air contains more oxygen than warm air. Increasing the oxygen in this process results in a greater volume of the air being used, which allows the engine to burn the fuel more efficiently during the combustion cycle. This results in an increase in torque and horsepower, while still using roughly the same amount of fuel.

To put it simply, adding oxygen to a fire will give you a stronger fire. Cold air intake systems are designed to deliver more oxygen-rich cold air into the engine than the stock air intake. This results in a stronger explosion, which contains more force to push the piston up and down to turn the crankshaft. The extra energy or power is then transferred to the transmission and out to the wheels.

We will take a closer look at the benefits of a cold air intake on a truck after our top 5 list. 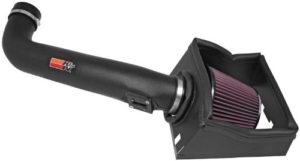 When you think of cold air intakes, K&N is the brand that first comes to mind. K&N are undoubtedly one of the most popular brands in the cold air intake market – and for all the right reasons! It probably comes as no surprise that this brand would top the list. From systems designed only to increase noise, right up to systems boasting 25hp increases, K&N has the widest range of intakes on the market!

This specific system will give you up to 12 more ponies. It may not sound like much, but it feels like you’ve gained much more. This is due to the massive increase in throttle response. The air gets to your engine much quicker with this system which results in instant power. The nice grunt from this intake sounds similar to having a mild exhaust installed.

This system is designed to last up to 100,000 miles before service is due. I can’t comment on this because I’ve never had any single truck for more than 100,000 miles. I can tell you from experience that this intake system install will only take 30 minutes at most. It also completely replaces your factory intake, leaving much more space under the hood.

K&N air intakes have always been my first choice and that’s why I’ve given this the number 1 position. I highly recommend them. Pair it up with an aftermarket exhaust system and you’ll see what I mean! 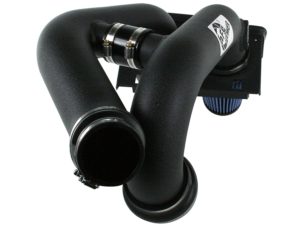 Got a Ford F150 Ecoboost ? This is by far the best Ford Ecoboost cold air intake system that money can buy! Its on the higher end of the price range, but man does it deserve it! I have several buddies with this system and the difference it makes is outstanding! I’m sure you have noticed the ‘lag time’ you get with the standard air box in the F150 Ecoboost. Well, this system completely changes that, the throttle response increase is phenomenal and the turbo spools almost instantly!

This stage 2 air intake system produces an astonishing 32 horsepower and 35lbs x ft. torque and outflows the factory intake by 44%! The 5 layer progressive, oiled cotton gauze air filter provides maximum flow for increased horsepower and torque. Installation for this is also straight forward and should only take about 30 minutes.

Overall: Highly recommend this system if its within your budget. The increases speak for themselves, and the turbo whistle noise becomes louder which is cool! 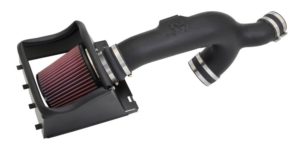 Another K&N cool air intake syatem, are you surprise? Nah, me neither! Another system for the Ecoboost drivers, similar to our number 2 contender. Product features include:

This system and the aFe system seem to be pretty similar performance-wise, but I’m listing this in 3rd position. Mainly due to the fact that the aFe was a bit easier to install. Other than that, I cannot fault this system, and at less than 300 bucks I think its a worthwhile truck upgrade! 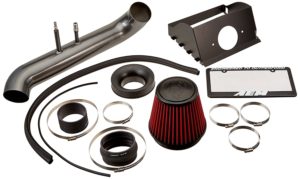 Another provider of high performance cold air intakes, AEM may not be as popular as K&N, but that doesn’t mean there systems aren’t top notch. AEM parts are a common sight on high performance cars, so they must be doing something right!

This one comes with an extra large washable filter providing maximum air flow. This system will last up to 100,000 miles depending on driving style. Overall its a very easy intake system to install, completely replacing your factory intake. Its design leaves plenty of space in your engine bay, allowing easier access for servicing and repairs.

Sound: Very aggressive with medium to heavy throttle. Quiet as a kitten at cruising speed.
Performance: Quicker and lighter throttle response. Slight pickup on acceleration.
Visual Appeal: The kit is super clean and the AEM patented grey tube finishes off the look.
Gas Mileage: Increased from 18.5 to 18.8 MPG based on 2000 mile test.

Verdict: A great all round cool air intake at an affordable price. Gets a thumbs up from us, and I have yet to hear a bad complaint about it! 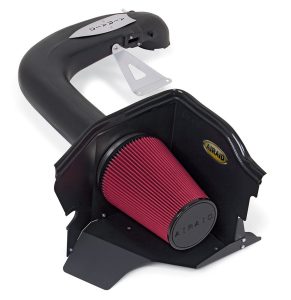 Of all the intakes systems I have dealt with, this has probably been the easiest to install. The installation manual provided is super easy to follow, even if you aren’t mechanically minded. It looks great under the hood and allows for a little more elbow room. Some people will swear by these in their instead of K&N intakes.

This system is washable and reusable and should also be good for around 100k miles. Its hand built using high quality materials and will slightly increase gas mileage. It has a Synthaflow air filter which provides maximum air flow and filtration. From my experience, Airaid has excellent customer service, and they offer a lifetime warranty on these products.

This may be #5 on the list, but don’t let that discourage you. Ask around and have a look at the reviews on Amazon, you will quickly realize that its a good choice!

What are the benefits of a cold air intake system?

Depending on your vehicle and the type of intake system you choose, you could see an increase of 25HP+. Saying that, to get the most out of your intake system, an ecu tune is advised. Additionally, cold air intakes help boost the engine’s responsiveness to acceleration by offering more air to the combustion cycle, which helps your vehicle reach the desired speed faster.

Unlike the disposable paper filters found in standard intake systems, most aftermarket intakes come with a washable filter. Instead of constantly having to replace the filters, aftermarket cold air intakes should just be cleaned every 25,000 to 50,000 miles. In the long run, this will save you a good amount of money.

Most engines work off of a mixture of fuel and air that creates an explosion that powers the car. If your vehicle is having problems delivering the sufficient amount of air, the vehicle will compensate by burning an increased amount of fuel.  Stock intakes are more focused on being quiet than fuel efficient. So, by adding an aftermarket cool air intake, you can increase your vehicles fuel efficiency by a few miles per gallon easily.

This isn’t really a performance benefit, although it may make us want to drive faster! The higher flow of air into the engine gives a nice grunt when you sink the foot. Most people love the noise of a performance intake, but if that’s not your thing there are plenty available that muffle the noise.

What’s wrong with the stock cold air intake system that came with my truck?

Well, nothing – technically – unless you care about getting max performance out of your F150.

To understand why most truck enthusiasts rave about this upgrade, you need to know a bit about chemistry.  Cooler air is heaving and more dense than warmer air which means that it is able to hold more oxygen molecules in tighter formation than warm air.  Because of this density, cold air is, by nature, more oxygen-rich than warmer air.

And … your F150 truck engine craves oxygen to maximize output!

Most stock intake systems are poorly positioned and end up inhaling warmer air, often the air that comes out of the exhaust system itself.  Although they tend to last a long time, they certainly are not designed for optimum peformance.  This warm air is low in oxygen and results in poor combustion causing your engine to work overtime and leading to less output.

A cold air intake system, in comparison, is designed to suck in cooler air near the fender of the wheel well or at cooler locations within the engine compartment.  The cooler, oxygenated air allows for more efficient combustion and, better power!

Are oiled or dry filters better for my cold air intake system?

Unfortunately there is no “one size fits all” answer for this question.  There are pros and cons to both filter types and it mainly comes down to personal preference and trade-offs.

Oiled filters are made up of a few layers of cotton gauze that has been coated with a small amount of specially-formulated filter oil.  The oil acts like a dirt trap against particles.  In contrast, a non-oiled filter is simply made up of several layers of paper and can trap much smaller particles, down to ten microns.

Oiled filters are slightly less restrictive than non-oiled filters so, by their nature, they allow higher volumes of air to reach the engine.  Higher air volumes, especially of cooled air, into the engine allow for more efficient combustion and better overall engine performance.  One downside is that the oiled filters can get dirty easily and will require periodic maintenance to re-oil the surface.

This one is really about personal preference and we recommend you try both if you are the tinkering type.  If this isn’t your cup of tea to mess with, just go with the filter type that came with your cold air intake kit.

What tools do I need to fit a cold air intake system?

Nowadays, manufacturers spend a lot of time developing intakes that are as simple to install as possible. Generally, it should only take about 30 minutes to install one on a F150. It requires only the following basic tools that most people should have:

I hope this article helps you choose the right cold air intake system for your Ford F150. I think it’s a fairly cheap upgrade for your truck, considering all the benefits. If you really want to make a difference, a fast flowing exhaust system along with this upgrade will see huge rewards!

Don’t worry if you don’t have an F150, most of the intakes on this list are available for different trucks.

Whats your views on this list? Is there anything you would like to see added to it? I’d love to hear from you, feel free to leave a comment in the comment section below. Keep on truckin’ mother truckers!

This site uses Akismet to reduce spam. Learn how your comment data is processed.